Diane Harkey is a candidate for Orange County’s 5th Supervisorial District.  She was first elected to office in a sweeping victory in 2004, where she served 4 years on the Dana Point City Council, and as Mayor of the city.  In 2008 she was elected overwhelmingly to California’s State Legislature, representing the 73rd District of South Orange County, succeeding Mimi Walters who was elected to the State Senate in the same year. In 2014 she was elected to California’s State Board of Equalization, serving Orange, Riverside, San Diego and Imperial Counties, was elected unanimously by her peers as first Republican Chair of the Board in 15 years.
Diane graduated Cum Laude with a degree in Economics from the University of California, Irvine. Prior to her service in politics, she enjoyed a successful 30-year career in corporate finance and banking. Working in good and bad economic climates with individuals, small business owners, and leaders of publicly traded companies helped form the pragmatic business perspective that Harkey brings to any elected office.
For her constituents in general, she has capitalized on her private and public sector experience to promote the rights and interests of all taxpayers. Through numerous business, tax and non-profit workshops and seminars, and outreach programs, Harkey advocated for policies that support job creation in the private sector, improve California’s state budget outlook, and reduce the burden of complying with government audits and various tax regulations.
She is a proponent of public safety and a strong and vociferous supporter of law enforcement.  Harkey also is an advocate for the mentally ill and those in need in the homeless population.
Diane and Dan have one daughter, Jaclyn, a very successful businesswoman in the Newport Beach area, and her passions are jogging, horses, cats, economics, politics and reviving our tarnished Golden State. 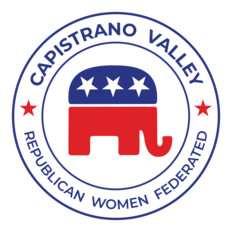 Check out The Trumpet for upcoming events and speakers, and the latest CVRWF happenings.  Don't miss out!

Become a Member of CVRWF 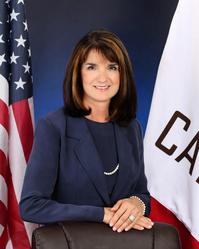 August 13 – RESERVATIONS ARE DUE for our August 18th Luncheon Meeting, contact Diemmy Wandrocke at 949.510.7047 or wandrockefamily@gmail.com to make your reservation. REMINDER: Advance registration is required and cost is $35/per person, also if you invite a friend make sure they RSVP and pre-pay as well, as seating is limited. CLICK HERE to RSVP and pre-pay online.

Our amazing speaker this month will be Diane Harkey, is a candidate for Orange County’s 5th Supervisorial District. Please be prompt as we will be on a strict schedule as follows:
11:00am - meeting begins/club business
11:30am - lunch is served
12:00pm - speaker Diane Harkey and Q&A
12:45pm - close meeting/raffle